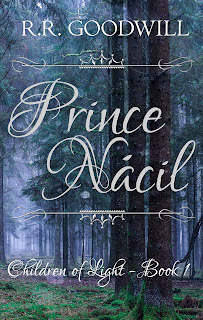 I received this book for free in exchange for an honest review. (It's honest, I promise)
Purchase Link: Amazon
Posted by Live. Love. Read. at 9:26 PM 1 comment:

Today we have a very special guest for an interview! I'm so glad that RR Goodwill could be here today to tell us a little more about herself and her new book! Without further ado, let's jump in and see what she has for us today! 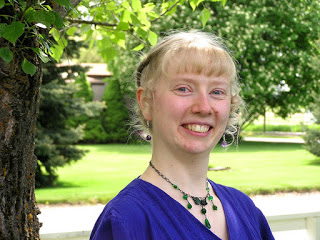 Greetings, Erica! I'm honored to be your interview subject today. You'll find my answers below in purple.
Do you have a favorite character in your story?
*Tsk, tsk* That's like asking a mother which is her favorite child.

I think the ones I found most enjoyable to work with, though, were Victor/Nácil, Müriel, and Miss Prescott and Lady Cambria to some degree. Nácil and Müriel are the most like myself, personality-wise; but more than that, I love the chemistry they have with each other. I loved the Mind-speaking scenes, and the deep connection they have, even though it gave me Da Feelz in more than one place. Miss Prescott was fun, pairing practicality and common sense with a love of the fantastical and thirst for Adventure. And Cambria ... *chuckle* Cambria showed up in the middle of the final incarnation of the story, insisting she was important to the overarching plot, and that it was perfectly logical for her to be there. And boy, was she right!
What was the hardest part of the book to write?
The actual plot, LOL. My inspiration comes in detached scenes and random bits of dialogue, so stringing all my "snippets" together coherently, and figuring out an interesting way to get Our Heroes from Point A to Point Z, was quite the challenge.
How did you work on your worldbuilding for the story?
I basically "borrowed" bits and pieces of Middle-earth and Narnia, combined them with concepts and imagery from Faerie-tales and other stories I enjoyed, and molded them all together into my own little world. Essentially, anything I like that fits within the typical pseudo-Medieval fantasy theme (or can be altered to do so), or that I wish existed or happened in our world (temperate weather year-round, for example), I put in Ýdära and figure out how to integrate it into the story in a way that feel snatural. Still working on that one ....
Do you have plans for a sequel or a spinoff with one of the characters?
My readers will be happy to know that I'm currently working on the sequel to Prince Nácil, and am hoping (Lord willing) to have it finished by the end of the year. I have ideas for at least one or two more books after that, as well as a prequel series and a spin-off saga involving one character mentioned briefly in PN (but who becomes mmore important later) and one who hasn't been born yet, cannonically. *Grin* Yes indeedy, I have plans ....
What is your writing routine like? Are you snuggled up with a mug of tea and a furry muse or furiously typing away in a vortex or somewhere in between?
When I'm in the groove, I'm usually plumped down at my desk, staring at my laptop screen, and struggling to find the right words to express the images and emotions of the scenes playing out in my head, and/or write down all that loverly dialogue before it evaporates from my brain. I generally don't encourage our puss-cat to sit in on my writing sessions because he's three feet long and 18-20 pounds of fluff and muscle, and consequently hard to reach over.

I do sometimes sip on a mug of cocoa or a bottle of root beer (if we have them) while I'm working. Once in a while I might make myself a snack. Most of the time, I'm too focused on the story to bother about food and drink.

What do you hope will resonate most with your readers?
Mainly, I pray that my faith will shine through the Faerie-tale elements, and point my future readers to Christ, without sounding forced or preachy. I also hope some of the themes in the story will spark some serious thought, touch their hearts ... and maybe even tickle their funny-bone. Themes such as forgiveness, moving past grief, waiting to form opinions until one has all the information, and that faith and love are more powerful than fear.
What was your favorite book growing up?
Oh, I had several! Just off the top of my head, I'd say our books of nursery rhymes and fairytales (including a beautifully illustrated adaptaion of Hansel and Gretel), the first six books of the Anne of Green Gables Series, Pride and Prejudice by Jane Austen, The Remarkable Journey of Prince Jen by Lloyd Alexander, and Howard Pyle's complilation of Robin Hood lore were perenial favorites throughout my childhood and growing-up years. Also C.S. Lewis' Chronicles of Narnia and Tolkien's The Hobbit and partf of Lord of the Rings, of course.

Thank you so much for coming by today! I can't wait to review Prince Nacil in a few days!
Posted by Live. Love. Read. at 9:58 AM 2 comments: