Today we have the pleasure of a guest post from Sarah Pennington. Her beautiful Snow White and Red Rose retelling releases today!

A Day in the Life of the Cat

Hello, readers of Live. Love. Read! Sarah Pennington, author of Gilded in Ice, here! Thanks so much for having me here! For today’s guest post, I’ll be doing something a little different than the norm: instead of me telling you about my characters, I’m going to let him do it himself. Cat, it’s all yours.

Good morning! Lovely day, isn’t it? No, no, stop looking around like you think you’re hearing ghosts. I’m over here. Up a bit — ah, yes. Now you see me, sitting here on the wall. What, didn’t they tell you that cat is my species, not my name?

You want to know what my name is? Sorry, I’m afraid I lost it. Most people just call me what I am — though some people make it sound like an insult. Kona, on the other hand, calls me chaton, which goes to show you what a lovely gal she is.

Who’s Kona? I’ll get to her in a moment. If you’re in a hurry, according to the author, you can go read about her in the book she wrote about both of us, or you can visit somewhere called Fantastical Notions. Your choice. I’ll wait — or, at the very least, I’ll come back. A cat can’t always afford to hang around in one place too long, you know. People start trying to catch you. Or throwing things.

I’m told that I’m supposed to tell you about a day in my life, though there’s not much to say. I’m a street cat these days, with the whole city for my home. On good days, I’m not sure if that’s an upgrade or downgrade from where I used to live. On bad days — when you get the kind of downpours where you could drown on dry land or when the lake elementals get disturbed mid-hibernation and whip up a blizzard over the city — I don’t have a doubt which it is.

In any case, no two days are really the same for me. Every day, I wake up and decide where I’ll wander. No point in staying in one place when it’s so easy to hop on the back of a streetcar and ride somewhere else, after all. One day I might prowl the rooftops of the Old City; the next I’ll lounge around the Innsjøby College campus; and on another day again I’ll nose through the streets of the southeast corner. When I get hungry, I’ll find a restaurant or a cafe or even just a market stand that seems friendly and see what I can get at the backdoor. I’ve found a few favorites — Anton’s on Mercer Street has very tasty chicken, and there’s a little Hellethene open-air place whose cook makes the best souvlaki I’ve ever had — but I try not to go anywhere too often.

Occasionally, for special occasions or when I want a treat, I’ll visit the restaurants downtown — there’s always tasty scraps to be had, and the chefs at the Ologbo Po believe it’s good luck to feet stray cats — or sneak into a theater or playhouse to catch a show or concert. Or I’ll go even further to the mansions up on the lake side of the city, to . . . to see what’s happening, I suppose you could say. Though I don’t make my way to that part of the city too often. I might be pedigree, but I find I don’t fit there quite like I should.

Of course, the other advantage of never going the same place too often is that it’s safer. There’s always someone who wants to get their hands on a cat like me. Better not to give them a pattern to follow.

There is one thing that stays the same every day, though. Each evening, I ankle down to a tenement apartment in the southeast corner, up to the fire escape where two lovely ladies are waiting for me. One’s Kona Dennel, the gal I mentioned earlier — the one who calls me chaton and knows just the right ways to brush out my fur and stroke my ears. The other’s her twin, Roselle — just as nice a girl, but she has her sights set on becoming a vet, so I find her sister to be the safer choice. They let me stay nights at their apartment in the winter and on rainy evenings — no small blessing, since they barely seem to have room for their own family there.

But even if I’m not their guest, we’ll meet to chat and trade stories of the day until there’s nothing left to say. Without them, my life would be a lonely one, since I can’t risk talking to most people. But I know I can trust them. They’re true friends, not mockingbirds. They’ll do just about anything for the people they care about, and I’d do the same for them. But I can’t help but wonder . . . just how far does anything go?

Frosted Roses Tour: Review: As Long as We Live by Cortney Manning

It's my second post for this epic tour, and this time it's a review. Now, I'll be honest, this is a long one... an epic actually, and I have not had time to finish it, especially being a first year teacher, so I'm gonna give you what I've got.

This story captured me really from the beginning. The characters were instantly engaging and the beginning premise intriguing. I love seeing the inspiration of Snow White and Rose Red come out. Rose and Poppy are adorable. Ivy and Pierre are great older siblings. I love exploring new realms, seeing all sorts of different types of good fae magic, and knowing that I'll have plenty of time to get attached. So far, nothing has been added so quickly that it confuses me, but it's also not dragging along. I'm super excited to finish the novel, because I'm convinced I'm going to love every moment of it, and I'll update you guys on my final thoughts. Also, take a peek at this gorgeous cover, am I right? 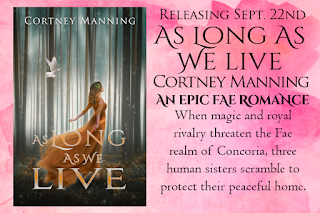 Other stops and such found down here...
As Long as We Live
By Cortney Manning
An Epic Fae Romance
Goodreads||AmazonSeptember 22nd 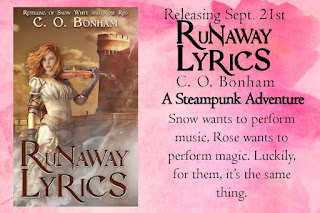 Wickham is the younger half-brother of Prince Bayare. They share a father but not a mother. He is okay with not being king, preferring science and magic to politics and diplomacy. As a result, he is very knowledgeable and doesn’t care who knows it.

He is very close to his older brother, who insists on calling him Wicky. Wickham pretends to hate this, but is secretly glad. His brother is one of the few people who treats Wickham like he’s normal.

Wickham’s mother treats him like he’s breakable. She’s always asking if he’s okay, trying to get him to rest. Never wanting him to go anywhere or do anything. She would keep him beside her at all times, if he would let her.

When Wickham was younger, he suffered from a mysterious draining illness that sapped his energy for days at a time, leaving him bedridden off and on, until his late teens.

Fun fact: history actually inspired the idea of having an ill prince. The royal families of England and most of Europe suffer from hemophilia (google it, it’s fascinating). This was going to be my reason for the younger brother to not be in the story much, but that didn’t feel right, so I made him a shape-shifting character named Wicky.

Despite his love of studying and his vast store of magical knowledge, Wickham does not appear to possess any magical abilities. Though he has a hazy memory of showing his mother a crackling purple spark that arced across his fingertips.

He started attending the university in the fall of his eighteenth year and was taking many of the same political and diplomacy classes that his brother had before him. Wickham made a deal with his mother that if he did well in these boring classes, then she would let him take alchemy during the summer months. Alchemy class does not go as he expects. Wickham’s search for answers directly leads into the events of Runaway Lyrics.

During Runaway Lyrics, Wickham finds himself drugged, kidnapped, lost in the woods, and transformed into a great forest owl.

Wickham never had much interest in girls, worried that they either just wanted to marry a prince or that they would smother him the way his mother did. But then he meets an outgoing girl named Rose that shares his love of magic.

Has he finally found someone who can see past his outward weakness and help bring out his inner strength?