Brielle Durand still feels haunted by the massacre that killed her mother a dozen years before. Vowing to never let it happen again, she’s risen to be the key defender for her people’s peace-loving French settlement living in hidden caves in the Canadian Rockies. When a foreigner wanders too near to their secret homes, she has no choice but to disarm and capture him. But now, what to do with this man who looks at her in a strange way and insists he can be trusted?

Hoping to escape past regrets, Evan MacManus ventured into the unknown, assigned to discover if the northern mountains contain an explosive mineral that might help America win the War of 1812. Despite being taken prisoner, Evan is determined to complete his mission. But when that assignment becomes at odds with his growing appreciation of the villagers and Brielle, does he follow through on the promise he’s made to his government or take a risk on the path his heart is leading him down? Either choice will cause harm to someone.

Brielle and Evan must reconcile the warring in their hearts, if they’ve any hope to find the peace the seek.

The characters in this book are so gripping. The setting is cool, the plot is interesting, but it's the characters that make the book so enjoyable. The internal struggles of each, the relationships that are built or examined. I love Brielle and Evan. They're the type of characters that make you want to stay up past your bedtime to finish the story. (May or may not be speaking from experience here) I've been in a bit of a funk lately and haven't been wanting to read as much, but this story kept me engaged and searching for more. Definitely recommend picking up a copy if you enjoy a great historical romance that is truly character driven. I really am in awe over the way the motivation holds up and the story moves along. 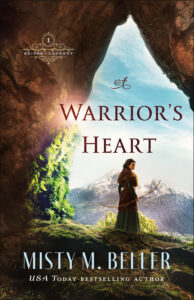 While I did receive a copy of this book for free, all opinions expressed are my own.

With her past behind her, she has nothing--and everything--to lose.

After being kidnapped as a child, heiress Emma Grace McMurray has seen firsthand the devastation that greed causes in the world, and she wants nothing to do with it. When she discovers her father has offered her up as a bargaining chip to expand his empire, she disappears into the night. Determined to stay hidden, even if it means always looking over her shoulder, she finds herself working as a Harvey Girl at the El Tovar Hotel.When Ray Watkins arrives at the hotel on business, he is immediately captivated by the beauty of the Grand Canyon. Though his fame-seeking father aims to lure new investors to the Arizona Territory, Ray dreams of one day taking over the family business and doing good with the profits.

Ray immediately admires Emma Grace, and though an attraction begins to form, she can't let go of the deep-rooted fear that he's just like every other wealthy man she's known. When suspicious activity follows Emma Grace and Ray to the El Tovar, they are pulled into a mystery that stirs up their worst fears. And as shocking revelations come to light, they are left to question all they thought to be true.

When I started this book, I had no clue how pointed it would be. I mean, I should have, because I find Kim's books are often like that, but I wasn't prepared. Emma Grace, our lovely heroine, and might I add, bitter heiress, struggles with trusting others, especially men, because of past hurts in her life. She would rather build walls than friendships, and she finds that when she does let her guard down and accept friendship, it grows like wildfire without her consent. I found myself relating an uncomfy lot to her. What I thought was extra special was that recently I've been listening to this song every morning, and the verse that Emma Grace says to herself over and over throughout the book is from Psalm 34.

I sought the LORD, and he answered me; he delivered me from all my fears.
I love everything that Kim writes. She does such a good job with setting and picture painting. She makes memorable characters and scenarios. I get so invested. I caught myself making worried sounds out loud while reading it. I laughed a tad bit loudly. I fought back the tears. Once I really sat down, I didn't move until I finished it, which is saying something because I've been in a funk for a few weeks and not felt like reading anything at all. I highly recommend this new one, and I'm just a tiny bit impatient for book two next October. I hope that Ruth and Frank get a book, because they sure as all get out deserve one!!! While I did receive a gratis copy of this book, my opinions are, per usual, my own.
This book releases October 5th! Be sure to snag your copy wherever books are sold!
Or follow this link:
https://smile.amazon.com/Deep-Divide-Secrets-Canyon/dp/0764238000/ref=sr_1_1?crid=19WM47JNYZ15E&keywords=a+deep+divide+kimberley+woodhouse&qid=1633467080&sprefix=a+deep+div%2Caps%2C191&sr=8-1