Lucetta Plum is angered when she is forced to go on the run after her step-father decides to gamble her away to an annoying admirer. Her friend, and self-appointed matchmaker, Abigail, carries her away to Ravenwood Castle, which just happens to be owned by Abigail’s grandson Bram. Abigail is sure that Bram and Lucetta would make a great match, but Lucetta is not ready to be set up. Besides, Bram has secrets. Secrets that make him look a few marbles short. So why, then, is she feeling attracted to him?


I’m giving this final installment in the A Class of Their Own Trilogy 5 stars.


1: This was the funniest one. It was HILARIOUS. But almost to the point of ridiculousness. However, it never quite crossed over. It was the perfect amount of humor. (This was the funniest but the first one was my favorite.) It’s a perfect balance of lightheartedness and weight. With a nice mysterious air thrown in there for kicks.


2: Abigail. She is the classic match-maker grandmotherly type. I love her so much. And she got the perfect ending that I’ve been wishing for since book one. Plus, she got to repair her relationship with her daughter, at least a little bit. Which I thought was very nice for her.


3: Poor Lucetta. She had so much more baggage than she gave herself credit for. 😉 I felt so bad for her, but the baggage turned her to God, so I don’t feel as bad as I could. And I think she got a little bit of that dealt with. Not all of it, but some of it for sure.


4: I loved that everyone got to come back for at least one scene in the book. Even Buford, for whom I have a soft spot as large as he is. Did I mention that this book has the most perfect ending? Like ever.


5: I totally had Mr. Grimstone and his identity pegged before the book was half over. I had to stop reading, while I just…. Processed is a good word, but not the perfect word. 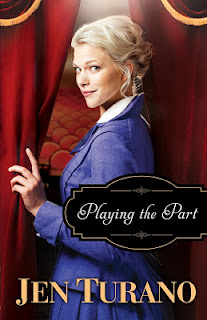 As you can tell, I wrote this during vacation, after a really long day. I read the book during a seven or eight hour drive (It didn't take me that long, I was also sleeping a tiny bit and talking some) and then wrote the review. I barely even remember writing it. Sorry. I hope it's still good.