Ada's House is a trilogy that follow several Amish couples through different struggles and romantic ups and downs. I started out the series listening to the audiobook, and while the reader was good, I was soon so caught up in the story that she just couldn't read fast enough. One of the main characters is Cara, whose Amish mother died without telling Cara about her Amish roots. Cara has a lot of bitterness built up toward her father and her Amish aunts and uncles who never came for her and left her to her fate in foster care. Deborah's fiancé left the Amish life. Sylvia is running from her former fiancé, and his wife, her sister. Lena is ashamed of her birthmark and afraid that no one will ever be able to see the real her beneath the mark. All of them find rest and comfort through the Bible and through Ada, a widow in her 40s who becomes surrogate mom to Cara, and who is definitely on Lena's widower father's radar. All in all, this is a delightful series that makes you wish for more. I want so many sequels. I need more than three books, because I've fallen in love with all the characters and I want to know more about them. Anything about them. I'm giving this series 4.5 stars. 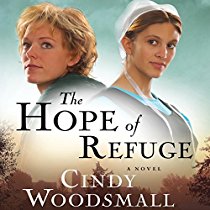