Official blurb- "Cara Bernay has never fit in. At loose ends in 1881 London after a near tragedy costs her a job, she befriends a carefree artist. With his help, she begins planning a new life and developing her own artistic talent. But soon Cara finds herself at odds with the artist's brother--a handsome but arrogant earl forcing his brother back to a "respectable" life.
Henry Burke, the Earl of Morestowe, feels the weight of growing financial burdens. His younger brother is the one person who can save their family, and Henry needs him back home. Despite misgivings about Cara's mysterious background, Henry sees she's a positive influence on his brother and on Henry's young ward, and he strikes a deal with her to return with them to their estate. But the family has their own secrets, and when Cara, drawn ever closer to Henry, stumbles onto the truth, she must choose between following her heart and pursuing a bold plan that could bring disaster."
This is the most stunning conclusion to the London Beginnings series that I could have imagined. I had thought that Rosalyn would be my favorite of the three, but Cara's story had me captivated. I was not willing to put it down! The setting was, of course, stunning. The cover- exquisite! The storyline- unimaginable! Each character brought life and meaning to the story, whether they were on every page or only one. Even the most minor of characters added depth to the story. There was no fluff in the book. Only what made me want to devour it more. Some highlights for me include- Cara's special bond with Amelia, the incredible last chapter and epilogue, all the little historical facts which sneaked into the pages, and the surprising twist near the end. The character arcs will make you want to squeal with delight, and you really won't get enough of this story before you find it is drawing to a close. So enjoy it while it lasts! 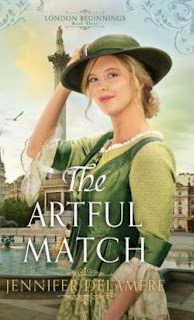 I received this book in exchange for my honest review.
Posted by Live. Love. Read. at 3:30 AM