Amazon Blurb- "When one Coast Guard officer is found dead and another goes missing, Coast Guard Investigative Service special agent Finn Walker faces his most dangerous crime yet. His only clues are what little evidence remains aboard the dead officer's boat, and the direction the clues point to will test Finn and the Guard to their limits.
When investigative reporter--and Finn's boss's sister--Gabby Rowley arrives, her unrelenting questions complicate an already volatile situation. Now that she's back, the tug on Finn's heart is strong, but with the risks she's taking for her next big story, he fears she might not live through it.Thrown together by the heinous crime, Finn and Gabby can't ignore the sparks or judgments flying between them. But will they be able to see past their preconceptions long enough to track down an elusive killer, or will they become his next mark?"
I've been hearing so many good things about this book! And when I remembered that I could grab it on NetGalley... oh happy day! The Killing Tide has to be one of my favorite books by Dani so far. The setting of the Alaskan Courage series had me hooked, and the danger from her Chesapeake Valor series was thrilling, but I was so invested in the characters of this new series! Especially Rissi. (I was going to be pretty upset if her story wasn't next, but it looks like I'm safe ;) ) The setting of this was also pretty great, although I'm not so sure that I'm too excited for our next trip to Topsail *insert nervous laughter* By the ending I'm pretty sure I was reading faster and faster with each chapter. I couldn't help being a little nervous for Gabby and Kenzie and Finn and Noah as they all got into some pretty tight scrapes! And I'll confess to a little horror at the freaky bad guys at the end. (But an admiring horror... that she could write something so deliciously scary!) Don't let the short chapters fool you into thinking that you are going to find an easy stopping place. If you put it down for anything other than food (I always get hungry reading Dani's books cause the characters are always eating!) then I don't know what to tell you except that you're off your rocker crazy. As a navy girl at heart, I still know that you guys are going to LOVE the Coast Guards in this series! 5 Bright Shining Stars!!!

You can pre-order now on Amazon here 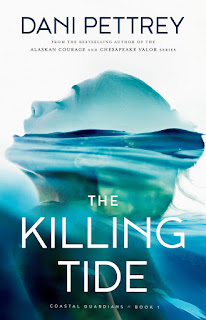 I read an ARC of this book from NetGalley.
Posted by Live. Love. Read. at 2:49 PM