Millie Maven, a fearful orphan girl who lives with her strict, evil aunt is trapped in a life of cruel punishment without any friends. So on the night of her twelfth birthday, when old Aggie of the woods invites her to take a journey that can change her life forever, Millie knows she has to go. Unsure but desperate, Millie embarks on a great adventure that takes her to the distant, mysterious world of FIGS, the FarPointe Institute for Gifted Students, where she might discover her true value through gifts that defy belief.

I was not actually expecting these books to be as good as they were. There are three books in the trilogy, and they didn't take long for me to read. (Mainly because they're for 8-12 year olds... which I am not) I ordered these for my classroom during a Black Friday sale. I love the idea of a Christian portal fantasy aimed at kids, and I was hoping the storytelling wouldn't be too hokey, as sometimes happens in this sort of genre. Thankfully, I enjoyed the series. My one complaint is that I feel like the books could have been longer. They didn't really thresh out the depth of all the characters they were trying to spotlight. The worldbuilding also suffered from the lack of length, leaving somewhat to be desired with the world of FIGS. It felt rushed. So much happened, what could have taken a whole year at magical otherworld boarding school, and it only took three weeks or less from what I can tell. However, when I finished the last page of the last book, I wanted to go back and enjoy the adventure again, and I wasn't quite ready to say goodbye to FIGS. I think the world of Millie Maven is a good choice for the age group, however, there are some spooky parts that the younger end of the range might be creeped out about. I enjoyed delving into the message of the series though and I think it's awesome for a children's series to so heavily emphasize that God's love, infinite, eternal, will strengthen us through every trial we face. I would say the theme of the series is that our identity is found in Christ, not feelings. I would recommend this series if your children enjoy fantasy type settings and you're looking for a clean but still magical story. 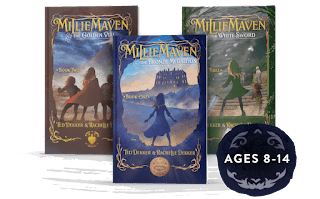