Review: Too Many Secrets by Patricia H. Rushford

This is the first book in the Jennie McGrady series. Jennie and her friend Ryan need to find Gram, who has disappeared and sent strange messages to Jennie. But just when Jennie gets a chance to leave  for Gram's house her mom makes her go to a counsellor. Gloria is supposed to help Jennie accept that her dad was in a plane crash on an assignment for the DEA. Jennie believes he is still alive and Gram is the only person who can help her. Then mom brings home Michael and Jennie's world tailspins. Then she and her cousin Lisa hatch a plan to go to counseling camp where Jennie escapes and Lisa becomes Jennie.


I have to give this a five ⭐️

1: Jennie has such a strong belief that her father is alive.

2: Lisa is so loyal that she gets in major trouble just to let Jennie escape.

3: Each chapter is a cliffhanger and the storyline keeps moving. There is no lagging here.

4: You don't know who is a bad guy or who is a good guy till the very end.

5: Jennie is so brave but is a totally believable character who makes mistakes. 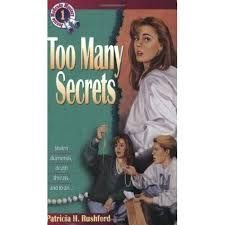