This classic follows the life of Molly Gibson as she aquires a new stepmom and stepsister. She grows awfully close to Sqire Hamley and his family and is with Mrs. Hamley as a companion for months. Mrs. Hamley comes to look at Molly as a daughter and when she becomes delirious near the end of her life even calls Molly by the name of her dead daughter. Molly unwittingly falls in love Roger Hamley but he falls in love with her stepsister Cynthia. Osborne Hamley is looked at as the protege but he falls from grace because of a secret that only Roger and Molly know. And Cynthia has secrets that Moly gets dragged into that end in the rumor mill for both of them.

1: It is excessively long with sometimes unnecessary details. It slows the story down and makes it harder to understand the first time through.

2: There is no ending!! Elizabeth Gaskell died one chapter short of finishing the novel. We obviously can guess the missing content but still.

On the other hand, good points include

3: Aimee works so hard to be accepted and Molly is such a good friend to her.


4: Molly puts on no pretenses. She tells it like it is. She's honest.

5: Hyacinth is very annoying but also crucial to the advancement of the story.  Sometimes. 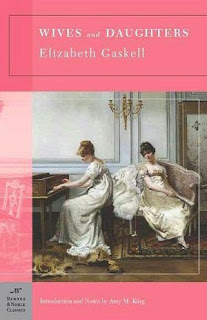