Decades of Loss, an Unsolved Mystery,
and a Rift Spanning Three Generations

Hazel DeFord is a woman haunted by her past. While berry picking in a blackberry thicket in 1943, ten-year old Hazel momentarily turns her back on her three-year old sister Maggie and the young girl disappears.

Almost seventy years later, the mystery remains unsolved and the secret guilt Hazel carries has alienated her from her daughter Diane, who can’t understand her mother’s overprotectiveness and near paranoia. While Diane resents her mother’s inexplicable eccentricities, her daughter Meghan—a cold case agent—cherishes her grandmother’s lavish attention and affection.

When a traffic accident forces Meghan to take a six-week leave-of-absence to recover, all three generations of DeFord women find themselves unexpectedly under the same roof. Meghan knows she will have to act as a mediator between the two headstrong and contentious women. But when they uncover Hazel’s painful secret, will Meghan also be able to use her investigative prowess to solve the family mystery and help both women recover all that’s been lost?

1: Yes.... I have been reading a ton of Kim's books.... Yes, you will keep hearing about them. Here's the deal. I haven't disliked a single one of her books, and more often than not, she has me crying. Her books always provide the perfect conditions to get emotionally involved, something I adore about them.

2: I enjoyed the (extremely random, as far as time and place we went to) flashbacks. It made this book the perfect blend of historical and contemporary. And just seeing everything through the eyes of the 3 DeFord women.... and then Sean. The POVs were exceptional.

3: Okay, well since this smarty-pants decided to start filling in random points and not do it in order, I'm going to put right here in the middle that this book had an incredible ending! I mean, all of her books do... another reason I love them. (Oh, but if I post this before the In Every Heartbeat review... that one scares even me. I haven't gone back to read over it again yet. Too scared. I wrote it while I was in a huff... the entire thing is a spoiler. Oomph.)

4: Honestly, if Diane hadn't had her "come-to-Jesus-meeting" when she had, I'd've had to slap her upside the head with her own book! And Meghan had hers. And I was just so happy! It was perfect! I was so glad they came to Jesus, so glad that I forgot the fictitious nature of the story.

5: Whew... if the bad guy (I'm not saying who, because it was a surprise for me and I don't want to spoil anything. Course, if I'd been actually trying to solve the mystery instead of all the relationships then I might have seen it....) hadn't already been taken care of, I'd be having some major problems. And if these characters weren't (unfortunately) fictional, then my problems have a high chance of landing me behind bars...... What scum would do that to sweet little Maggie!

This is gonna sound weird, and not-me, but if you had someone who actually knew how to make an accurate movie off of a book, I'd probably have that DVD worn down so fast..... I'm serious.

Well, we can definitely see that I don't have strong feelings about this book! (Sarcasm flowing strongly there) 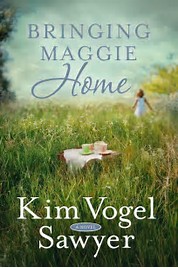 I received this book through the Blogging for Books program.
Posted by Live. Love. Read. at 6:30 AM