Elizabeth Camden is another of my favorite authors. In This Moment is probably my favorite, but I can't wait to read A Dangerous Legacy, which releases in October of this year.

"Camden is the master of historical inspirational romance..."--Booklist Telegraph operator Lucy Drake is a master of Morse code and has made herself a valuable asset to the Associated Press news agency. But the sudden arrival of Sir Colin Beckwith at rival British news agency Reuters puts her hard-earned livelihood at risk. Colin is talented, handsome, insufferably charming--and keeping a secret that jeopardizes his reputation.

Despite their rivalry, Lucy can't deny that Colin has the connections she needs to give her family an edge in the long legal battle they've been waging over their rightful inheritance. But when she negotiates an unlikely alliance with him, the web of treachery they dive into proves to be far more dangerous than they ever could have known. 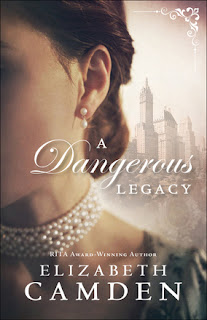 Waiting-On-Wednesday is hosted at Breaking The Spine.
Posted by Live. Love. Read. at 6:30 AM