The Heart's Appeal is a sequel to The Captain's Daughter, which my grandma borrowed and declared a really good book, and it comes out March of 2018. Jennifer Delamere is a new-to-me author, but I really enjoy her style.

Strong-minded and independent Julia Bernay comes to London to study medicine and become a doctor--a profession that has only just opened up to women. She witnesses a serious accident, and through her quick actions saves the life of an ambitious young barrister named Michael Stephenson.

Coming from a family that long ago lost its money and its respectability, Michael Stephenson has achieved what many would have thought was impossible. Hard work and an aptitude for the law have enabled him to rise above his family's stigma and set him on the path to wealth and recognition. But his well-laid plans are upended when the accident brings Julia into his life.

Michael soon discovers he's met a woman every bit as stubborn and determined to make her mark on the world as he is. Sparks fly--but will they find common ground? 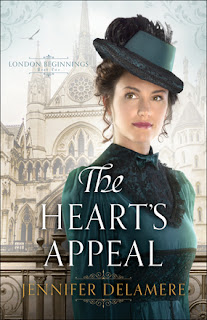 Waiting-On-Wednesday is hosted at Breaking The Spine
Posted by Live. Love. Read. at 6:30 AM