After helping her grandfather at their Boston auction house, Miranda Wimplegate discovers that she's accidentally sold a powerful family's prized portrait to an anonymous bidder. Desperate to appease the people who could ruin them forever, they track it to the Missouri Ozarks and make an outlandish offer to but the local auction house and all its holdings before the painting can move again.

Upon crossing the country, however, Miranda and her grandfather discover their new auction house doesn't deal in fine antiques, but in livestock. And its frustratingly handsome manager, Wyatt Ballentine, is annoyed to discover his fussy new bosses don't know a thing about the business he's single-handedly kept afloat. Faced with more heads of cattle than they can count- but no mysterious painting- Miranda and Wyatt form an unlikely but charged partnership to try and prevent a bad situation from getting worse.

I opened this book with high hopes, remembering Holding the Fort, which I read a few months ago. It was the first ever book by Regina that I had read and I was so looking forward to another such adventure. The story opens in Boston, and I quickly loved the heroine who would give her fancy hor d'oevres to grimy paper boys and beat off attackers with a silver platter. I fell in love with how much she loved her Grandfather, and how close she is to him. And just as quickly, I wanted to throw Cousin Cornelius out of the closest window. Phrenologist indeed! As if anyone could tell a personality but the shape of their head! Poppycock! And then Miranda lands herself, inadvertently, in quite a kettle of fish. I joined her heartbreak as Grandfather became more and more deranged the further they were from Boston. And then she and Wyatt decided to become one of the cutest, most argumentative, couples ever, and I just melted. Of course, that couldn't last forever, and Regina Jennings just took my chain and jerked it around, until I was cringing so much that I could barely continue reading. And then... well, then didn't I have a laugh. Small SPOILER AHEAD but my favorite thing ever just might be the fact that Miranda slammed her skull into Cornelius's nose 😂😂😂😂 It's just too good! Anywho, that's what I thought about this incredible, couldn't-put-it-down, can't-wait-to-read-the-next-one, one-of-a-kind, just-the-right-balance-of-mystery-and-romace book with a cow on the cover! {In case you weren't aware... I'm obsessed with cows... Proof below!} I'm giving this book 4.5 stars. 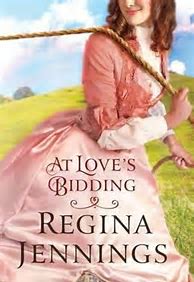 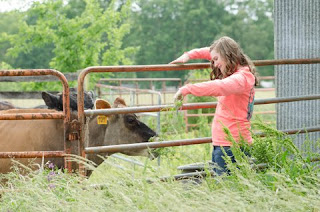 {That's one of my senior pictures! #LoveThemCows}