"Burning debris littering the ground . . . smoke pluming in the acrid air . . . this is just the beginning if he fails.

Seven years ago, operative Luke Gallagher vanished to become part of an elite team set on capturing a deadly terrorist. When Luke returns to face those he left behind, their help becomes his only hope of stopping his target's latest threat of an attack that would shake America to its core.
Private investigator Kate Maxwell never stopped loving or looking for Luke after he disappeared. But she also never imagined he left her or his life by choice. Now he's back, and together they must unravel a twisting thread of secrets, lies, and betrayal, all while on the brink of a biological disaster.
Will they and their love survive, or will Luke and Kate become the terrorist's next mark?"


WOW!!!! 5 STARS!!!! I think the word to describe me right now would be speechless. I'm not sure how to put into words what exactly I'm feeling. I've been anticipating this final book in the series for what feels like ages. It was in NO way a disappointment. (Well, I'm not all about tattoos. I could have skipped that part but the rest of the story was great!) I can't believe that I actually read this while home alone... it was pretty scary. That's the thing. Dani Pettrey always writes a believable mystery that feels like it really is happening. And I mean... let's top the cake with ANTHRAX by all means! WHAT????? Yeah, it was a little frightening because I could totally see all this going down. Of course, she also always finds a way to lighten the mood. And then the characters! The bad guys are the personification of a nightmare but the good guys.... How in this world can I explain this? The teamwork and cooperation, the building of trust, the heart-eyes they were constantly making. And then the fact that Dani never leaves behind the previous main characters. Everyone makes a good showing and even as semi-background-characters, we still see character growth and development! We also see the conclusion of not one, but two mysteries! The main problem of the whole series had to do with the anthrax, but we also get closure for Jenna, Griffin's sister. I've been waiting for this closure for forever! Let's talk cover design too, shall we? Like, of all the books on my shelf this one is the only one that looks like it wants to come off the shelf and eat me alive. That bright red is very fitting for the overall tone of the book. I hope you will read it and enjoy it as much as I have.

Thank you Dani for allowing me to be on your Suspense Squad! 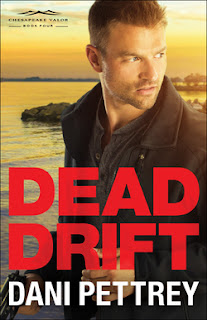