Review: The Cost of Betrayal~ Henderson, Pettrey, and Eason

Another post I dragged up from my archived drafts. Enjoy my weirdly old writing style. I hope to pop out a few new reviews soon, but just now my brain is already on overload!
I hope you'll forgive me for skipping the blurb... there being three of them for this book.

Is it really fair to review this as one? I mean... they are all in the same book, but there are three separate entities going on here. Here I go anyway though...

This was the first story by Dee Henderson that I'd ever read, though I know several people who are avid fans. I enjoyed the whole novella that started this collection. The characters were strong and there was a doggy for goodness sake! The suspense was great, and my inability to beat the ending to solve the case was annoying. Not...however... as annoying as having a (what I assume to be actually realistic) ending like that... which is to say, it wasn't a proper ending at all. If you like to have your mystery solved definitely, then I suggest you skip this one, "or wonder till it drives you mad" I suppose. Dani's novella excited me (having recently finished Dead Drift, I was "in the mood", you know) and it was suspenseful, and guessing the bad guy was really impossible. Unfortunately, it wasn't my favorite of her stories. Don't get me wrong! The farther in I was, the more I liked it. I suppose I'm just used to her series books. And last, but furthest from least, Lynette's story about Ruthie St. John, which, I'll admit, was the whole reason I bought this book. I couldn't stand by and lose a story right in the middle of a series, could I? Of course, having already had a background on the characters and the story, I think, made it easier for this to be my favorite. I was excited to see a glimpse of the police Chief, and to see more of the brothers and sisters that had already wormed their way into my heart.

Truly, I do recommend this set. I know it sounds like I said a lot of negative things, but the chills up my spine weren't imaginary! (Although, I'm sure they were caused by an overactive imagination!) A nice set of mysteries that are easy reads by three incredible authors. I'm excited for this to grace my shelves! (I've a nice place for it right between Code of Valor (Eason) and Blind Spot (Pettrey)!) 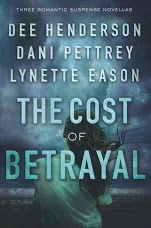