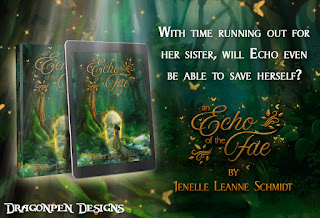 The Building of Ennis Rosliath

When I began writing An Echo of the Fae, I had a very clear picture of Echo’s home in my head. I knew this story would be a little bit smaller in scope than most of the other books I’ve written, and so the world-building was much smaller in scale as well. Because the book deals strongly in selkie mythology, I knew that I wanted to weave a lot of threads through the story that would look and feel like Scotland, where many of the selkie legends originate.

The entire story takes place on a single tiny island that I modeled after the Outer Hebrides (small islands off the west coast of mainland Scotland). Both the island and the main village share the same name: Ennis Rosliath.

Because the story revolves around the two important settings of the ocean and the forest, I wanted the name of the island to reflect this, so I went searching for Gaelic words to see what I could come up with. I found that “inis” means “island” in Gaelic, so I took that and changed it a bit, and then, I took the word “foraoise,” which means “forest” and played with it until I had turned it into “Rosliath” so that “Ennis Rosliath” basically means “forested island.”

Even though this is a fictional island, I wanted it to feel grounded in the reality of Scotland, so I did a lot of research on what plants and birds are indigenous to Scotland, as well as a lot of research into their traditional foods and seasons so that I could give the mortal side of the world in the story a more realistic and somewhat familiar feel to it. It helped a lot that I have actually visited Scotland, and was able to pull some of the images from my own memories, even though this story is set in a much earlier time period than our own.

Another thing I did to help me with the world-building of Ennis Rosliath was that I I did draw a map of the island fairly early during the rough draft, which I am not going to share here because... well... I drew it. And I can’t draw. But I do find that having even the most basic of maps helps me keep my story consistent so that I always know where my character is in relation to other locations in the story. I don’t want to say that Echo left her house and traveled west to the forest and then later have her head home from the forest by heading south. That sort of inconsistency gives my dear editors headaches!

I hope that this has given you a glimpse of the world you can visit in An Echo of the Fae. If you’d like to hear more about the world building for the fae realm in this story, please visit THIS POST in the tour to learn about the fae-realm where Echo must venture in order to save her sister.