Cover Reveal: An Echo of the Fae by Jenelle L Schmidt

I can't wait to share my review of this book, because it was amazing. BUT... since I do have to wait, I'll just pop in here with the absolutely gorgeous cover, the blurb, and even an excerpt for all of you who want to read this [and for those of you who are going to want to read it after the except ;)]

About An Echo of the Fae:

Echo enjoys the peace and solitude of the Faeorn forest, regardless of how strange spending time in the “haunted” wood seems to others.

But on the cusp of her thirteenth birthday, the discovery of a family secret reveals why Echo has never been drawn to the sea like her mother. This discovery shakes the foundations of her world and sends Echo on a quest, not merely into the forest, but into the heart of the fae-lands themselves, to rescue the sister she didn’t know existed.

Elves, dragons, and fairy courts will put Echo’s wit and resolve to the test. But with time running out for her sister, will Echo even be able to save herself?

A fairytale adventure perfect for fans of The Secret of Roan Innish and The Girl Who Drank the Moon.

Endorsements:
“Enthralled by the terror, charm, riddles, and beauty of a richly depicted fae world, I devoured this marvelous book in two sittings! Readers of all ages will love Echo, a heroine strong in her weakness, clever and resolute amid her doubt and fear. An Echo of the Fae is sure to satisfy lovers of adventure and faery!” -- J.M. Stengl, author of The Faraway Castle Series 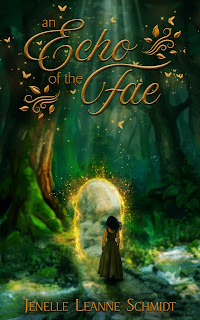 Isn't this cover gorgeous? I'm so in love! Feel free to share and get the word out. There are going to be links to pre-order at the bottom of the post, below the excerpt. And if you check around on other blogs, you might be able to find a different excerpt, since I know there are several floating out there.

“You dare steal from the King of the Winter Court?” The voice reverberated through the air, its sheer, palpable power pushing Echo to her knees. The lantern dropped from her nerveless hand and clattered on the ground.
Echo bowed her head respectfully, racking her memory for every snatch of folk-tale she had ever heard about the Winter Fae or the Dark Host. “Forgive me, my lord,” she whispered. “I did not intend to steal from you. I merely seek to save the life of my sister.”
She heard soft footfalls approach across the sable ground but she did not dare raise her eyes, not even when she felt the touch of hot breath on the back of her head.
“You smell of truth.” The voice sounded puzzled. “Rise, seeker.”
Echo stood, wincing at the pain in her feet. But that thought fled with the rest as she came face to face with the largest tiger she had ever seen.
Upon reflection, it was the only tiger she had ever seen. But she was reasonably certain that, should she ever see another, it would be quite different from the monstrous beast that confronted her now.
Her eyes were even with his shoulders, and he stared down at her from his impressive height, his long whiskers twitching inches above her face. His fur was utterly black, the color of coal. Instead of stripes, Ritioghra’s—for it could only be Ritioghra—body was covered in swirls and whorls of gleaming blue, the same color as the Everflame. His eyes gleamed like two massive stars of an identical shade, and he gazed down at her with an expression of ferocious curiosity. He was utterly terrifying and utterly beautiful.
Terror coursed through her veins like ice, but the light of intelligence in his eyes gave her courage.     “For-forgive me, my lord.” Echo gave a wobbly curtsy.
The tiger stretched with a lazy nonchalance. Every line of his long body rippled with power and strength, like the unstoppable force of a river about to burst its banks.

ABOUT THE AUTHOR
Jenelle first fell in love with stories through her father’s voice reading books aloud each night. A relentless opener-of-doors in hopes of someday finding a passage to Narnia, it was only natural that she soon began making up fantastical realms of her own. Jenelle currently resides in the wintry tundra of Wisconsin—which she maintains is almost as good as Narnia—with her knight-in-shining armor and their four adorable hobbits. When she is not writing, she homeschools said hobbits and helps them along on their daily adventures... which she says makes her a wizard.

The cover art/design was done by the amazing Savannah Jezowski with Dragonpen Designs.

PRE-ORDER LINKS AND GOODREADS (That's a hint to add it to your shelf :P)