Review: The Nature of a Lady by Roseanna M White

1906Lady Elizabeth "Libby" Sinclair, with her love of microscopes and nature, isn't favored in society. She flees to the beautiful Isles of Scilly for the summer and stumbles into the dangerous secrets left behind by her holiday cottage's former occupant, also named Elizabeth, who mysteriously vanished. Oliver Tremayne--gentleman and clergyman--is determined to discover what happened to his sister, and he's happy to accept the help of the girl now living in what should have been Beth's summer cottage . . . especially when he realizes it's the curious young lady he met briefly two years ago, who shares his love of botany and biology. But the hunt for his sister involves far more than nature walks, and he can't quite believe all the secrets Beth had been keeping from him.As Libby and Oliver work together, they find ancient legends, pirate wrecks, betrayal, and the most mysterious phenomenon of all: love.

It's not often that I review the same author here twice in a row. Much less two days in a row, but I must. When I started this book, I was determined that I would NOT like it. It was so very opposite of everything that I had read from Roseanna M White so far. Not set in London. Not set in the 1920s. No sneak appearances of Brook. No, not something I was prepared to like. But oh, I was wrong. Despite myself, I fell for the characters. I fell for the place. I fell for the time. I fell, first, for Mamm-wynn. By the second half, I was laughing so hard. As many tears as A Portrait of Loyalty brought me, this brought me laughter. What's more, something mon papa is so quick to say to me was written almost word for word. "Always a choice." I showed him, and he approved. I honestly didn't know where Libby's obsession with Darwin was going, but I don't think it went too far, though I was nervous for a minute or two. Yes, this is just the lovely sort of tale I needed, but didn't know. I can't wait to read Beth's story next. Unexpected, but not surprising, this new series is a hit! 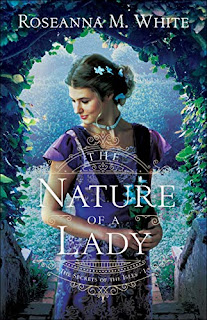