Review: A Portrait of Loyalty by Roseanna M White

Zivon Marin was one of Russia's top cryptographers until the October Revolution tore apart his world. Forced to flee to England after speaking out against Lenin, Zivon is driven by a growing anger and determined to offer his services to the Brits. But never far from his mind is his brother, whom Zivon fears died in the train crash that separated them.Lily Blackwell sees the world best through the lens of a camera and possesses unsurpassed skill when it comes to retouching and re-creating photographs. With her father's connections in propaganda, she's recruited to the intelligence division, even though her mother would disapprove if she ever found out.After Captain Blackwell invites Zivon to dinner one evening, a friendship blooms between him and Lily that soon takes over their hearts. But both have secrets they're unwilling to share, and neither is entirely sure they can trust the other. When Zivon's loyalties are called into question, proving him honest is about more than one couple's future dreams--it becomes a matter of ending the war.

I can't believe that it took me this long to read this book. I knew I loved everything I had read by this author, but at the same time, I wasn't in the mood, I thought. Yesterday, I decided to make this my first read of the new year and I am devastated. This book absolutely broke my heart. I had to stop reading in the middle and take five to sob my heart out. The artistry in this book is just beyond. I haven't cried so hard over a book in years. Each and every character was perfect, and somehow even the people I hated became people I loved, which I sure didn't think would happen the first time I saw them. I love how characters from the previous books were woven in: Brook, Margot, Barclay, Camden and Ara, Blinker Hall. At first, I didn't think there would be enough chemistry between the MCs but I was so very wrong. This may have been the perfect ending to a world I've come to love over the past several years. But following all of WWI from beginning to end had such a feeling of accomplishment. I absolutely recommend this book, this series, all three series that cover this basic time period and locale. I can already see this book being one of my top for all of 2022. 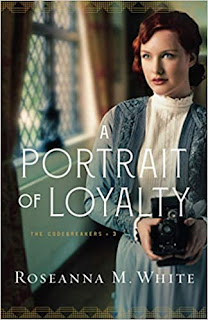