This is one of Dickens's most famous books. It follows the adventures of a boy named Pip who is forced to help an escaped convict, is sent to play with the adopted daughter of a men-hating woman, and eventually grows into a young man with "Great Expectations" from an anonymous source. He falls in love with his childhood playmate and because of this misreads literally everything around him.

This is one of the very first classics I ever read. I love it. 5 Stars!

1: Miss Havisham, the crazy lady who hates men and stopped all the clocks in her house, is honestly one of my favorite characters in classical literature. She does some very not god things, and yet Dickens allows you to see her reasons. And for some crazy twisted reason, I love Miss Havisham.

2: Estella, Miss Havisham's adopted daughter, is a very complicated character. As you read the book you find out Estella's true parentage, and you can see that she is only what Miss Havisham made her. Estella isn't truly mean-spirited, just manipulated.

3: As with many of Dickens's novels, this story has several subplots. Only, by the end of the book they aren't subplots. Dickens is the master of twisting and turning until every unconnected detail plays hand-in-hand with each word.

4: The person responsible for Pip's fortunes... my mind yet struggles to wrap itself around it and yet it makes perfect sense, in a twisted Dickens way.

5: The ending, which by the way was not the original ending, left the story ending a little ambiguous but with enough clarity to be able to make an educated guess as to the future of Pip and friends.

Long story short, this story is all around a great read. Plus, it gave me the insult that I most often use on my brother, so that's not nothing! 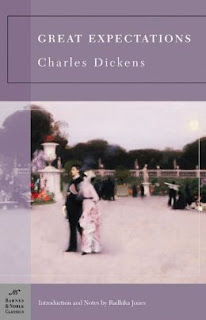 Email ThisBlogThis!Share to TwitterShare to FacebookShare to Pinterest
Labels: Classics