Review: This Side of Heaven by Karen Kingsbury

I'm completely unsure if I can do this without at least one spoiler. I'm gonna try, but don't get your hopes up. I'll warn you before I do it, if I find that I must. In fact, just to help with that, I'm going to use the plot summary from Goodreads. Otherwise, it's gonna be a mess.


Annie Warren always wanted the best for her son, Josh. But years of failure and bad choices created a heartbreaking distance that has grown far worse since the day Josh was hit by a drunk driver. Now on medical disability, Josh has put his life on hold for years, waiting for the insurance company to send a settlement that never seems to come. Worse, he believes the story of a scheming woman who claims they have a seven-year-old daughter named Savannah. Despite the unlikelihood and complete lack of evidence, Josh dreams of being a father and is determined to one day claim the child. His family doesn't know the full story. They don't know what happened the night of the accident that was worth the chronic pain Josh suffers every waking minute, or that he is turning his life around. They haven't seen that Savannah's eyes are his, and they don't know how desperately the little girl needs her family. When the settlement that rightly belongs to Josh is threatened, Annie sets out to defend her son. But she might find a treasure more valuable than money, one she never expected, one that is the greatest gift her son could ever give her--

1: Wynonna Judd. SERIOUSLY!!!!!! I Can Only Imagine is my alarm ringtone. I've found that it is one of a few songs that don't cause me to wake up grouchy. How can I when the first words I hear each morning are "Surrounded by Your Glory"?

2: The only thing about the book that I didn't like was (and I do realize I wasn't supposed to like this) was how big of a sleeze-ball Maria Cameron was. Seriously?!?! I wasn't a big fan of the sections written from her POV.

3: Savannah didn't know much about Jesus, but she knew He loved her, and that she could trust Him. And what else do we need to know? Really? (also, I have a baby cousin named Savannah who I love quite a lot)

4: This is the third Karen Kingsbury book I've read, and I think I've cried every time. This isn't a romance. And I think it's not the first in the series. I'm not sure, but I think it comes either in the middle of or near the end of a series. maybe it's a stand alone book. But I don't think so. Either way, I'm quite notorious for reading books out of order. It didn't affect me. I followed the story easily.

5: Ok WARNING... I KNEW I COULDN'T DO IT! SPOILER FOR #5!!!
Emotional rollercoaster!! I don't even know! First off, who kills the main character in chapter 10 (or 9)!!!! And then I had chill bumps and tears. I just wanted Annie to get Savannah so bad that it hurt. I was starting to skip lines I was reading so fast. And then I di something that I never do. I read the "Dear Readers" part and I am in need of a few tissues right now! 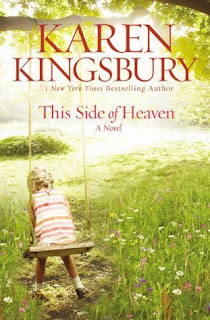