When you're in the mood for reading, but you're house is a royal mess, what do you do? Listen to audiobooks obviously. But you have to have a really, really good reader or that's the absolute worst. As you can probably tell by the title, I decided on Peter Pan. I have to be honest, this was the first time I'd ever read/heard the actual unabridged book. (Disney only, to my shame.) First off, it was much more violent than I had expected. But it was still super awesome. I love how the lost boys all adopted Wendy as their mother, and she just totally rolled with it and fussed over them and scolded them. It was hilarious. And the reader was GREAT! He totally had it. He in no way sounded like a robot. YAY!!!! (Cause that's the worst!) The ending got me though. I mean, I knew it was coming, but I was getting all teary-eyed, which was funny. I'd definitely recommend this to everyone, keeping in mind that Tink's line had a different meaning then and wasn't considered bad back then. 4.5 stars I think. 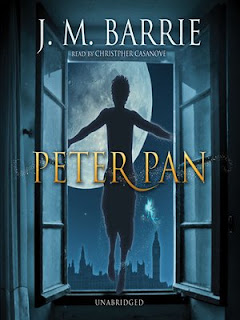