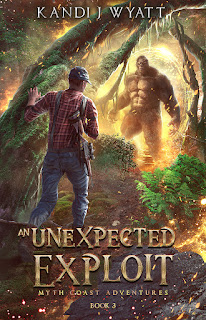 Kandi is doing a giveaway for those who pre-order the book on Amazon! http://bit.ly/preordergiveaway The link to the book itself is after the blurb.


Protect a mythical realm or his family?

Sixteen-year-old Franklin follows a Sasquatch through a portal to the realm of Shinwano and discovers a world full of mythical creatures he never expected to actually exist. Upon returning to Myrtle Beach, Oregon, he vows to protect the land, not realizing how difficult it will be to keep his promise, especially when a poacher, a NSA agent, and his friends are interested in the portal—and all for different reasons.

When the poacher threatens his family, Franklin must reconsider his vow to protect this new world to keep his family safe. The consequences of his decision reach further than just a rift in the space-time continuum.

Can Franklin live up to the trust placed on him and save this new world from an even greater danger?

One reviewer said: Overall, I loved this book. A wonderful alternate world with such fantastic descriptions of the mythical creatures. I would love to go there myself.

Here's the link to this book! Link: https://books2read.com/mythcoastadventures3

Other books in the series: 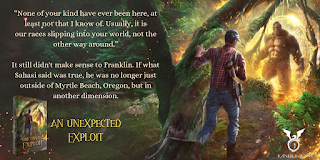 SUPER EXCITED TO HAVE KANDI DO A GUEST POST!

The stories of bigfoot abound all across the world—not only in North America. I was first introduced to bigfoot when I moved to the Pacific Northwest as a third grader. No specific memory stands out to me, but I do remember vague stories as we trekked into the forests around Tacoma, Washington. It wasn’t until I was older and had moved to the Southern Oregon Coast that I really started to pay attention to the tales.

A trip to Eureka, California, almost twenty years ago, piqued my interest. We went off Highway 101 up to Willow Creek. The closer we drove to the settlement, the more signs we saw. By the time we arrived, we had to stop at the bigfoot museum. The little hole-in-the-wall stop was filled with newspaper clippings, footprint casts, and videos—some live and others news footage. The whole trip sparked my imagination.

Fast forward to 2016. I had an idea of a trilogy that I wanted to write which featured a different mythical creature for each book. A dragon and a unicorn had already been chosen for the first two books, but I was stumped as to what to feature in book three. That is until a student came up to me and said I should write a book about sasquatch. What he didn’t know was how perfect that would be for the Myth Coast Adventures trilogy. Yet, I had no idea of what the story should be, even after writing books one and two! What should I do? I did what I do when I don’t know something—I turned to google.

The amount of information out there on bigfoot is rather impressive. I learned that sasquatch and yeti are not the same creature. Yetis are larger, taller, and lighter colored than sasquatch. Youtube videos show encounters with bigfoot. All of the tales portray sasquatch as a large predator who wants to be left alone, but what if they’re actually trying to protect something? With that thought, the sanraksaka were born—the protectors of the portals. Imagine my surprise to discover a magnet in a tourist shop that says, “This forest protected by bigfoot.” I had to buy it! You can enter to win it at the release party on facebook on Tuesday, September 10. 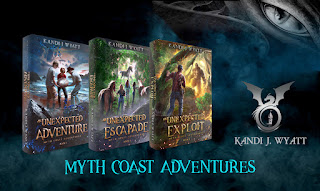 About Kandi: Even as a young girl, Kandi J Wyatt, had a knack for words. She loved to read them, even if it was on a shampoo bottle! By high school Kandi had learned to put words together on paper to create stories for those she loved. Nowadays, she writes for her kids, whether that's her own five or the hundreds of students she's been lucky to teach. When Kandi's not spinning words to create stories, she's using them to teach students about Spanish, life, and leadership.


You can find Kandi at these places:
Website: http://kandijwyatt.com/

I hope you've enjoyed the guest post, and please, leave a comment below on your thoughts for this cover! Can't wait to hear from you!
Posted by Live. Love. Read. at 2:00 AM