Amazon blurb- FBI Special Agent Lincoln St. John is living his own personal nightmare. When the woman he loves, Allison Radcliffe, is killed, he devotes his life to tracking down the killers and making them pay for their crimes. He expected it to be a challenge. What he never expected was to find Allison very much alive shortly after her "murder." As his anger and hurt mix with relief, Linc isn't sure how he's supposed to feel. One thing he does know for sure: he and Allison will have to work together to stop a killer before she dies a second time--this time for good.

The Blue Justice series might just be my favorite yet. I've excitedly followed this series from the beginning and I'm sad to see it almost finished! Vow of Justice, though, is vying with Oath of Honor for favorite in the series. A change from the mostly PD themed series, we get to travel the intricacies of the FBI, especially of being a dead FBI agent. This time around, our bad guy is part of the Bratva, which I've totally been waiting for. The secondary character here is named Daria, incidentally that name of one of my closest friends. (Although she spells it Darya.) Allie had one of the most surprising plot twists I've ever read, and Linc just steals your heart. If you don't fall in love with them, then the problem is you. Of course, Chief Tabitha St. John makes her appearance, and she continues to be one of my favorite characters ever created by Lynette Eason. The twists and turns will have even the most well-read mystery reader gasping, and the revelation of the true bad guy, while not completely unpredictable after going through my recent Eason spell, was still horrific enough that it didn't matter. And then, you'll come to the epilogue and your eyes will bug right out of your head, and it will be the MOST perfect epilogue ever. (I say as someone who really judges a book by its epilogue more than its cover) It's a five star book, and I hope it just skyrocketed to the top of your TBR list. 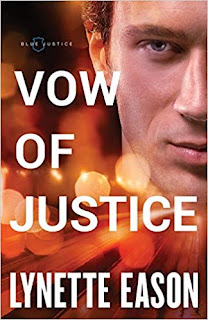 I received this book from the publisher, but the opinions expressed are honestly my own.
Posted by Live. Love. Read. at 3:50 PM