"Sophie desperately wants to get away from her stepmother's jealousy, and believes escape is her only chance to be happy. Then a young man named Gabe arrives from Hagenheim Castle, claiming she is betrothed to his older brother, and everything twists upside down. This could be Sophie's one chance at freedom—but can she trust another person to keep her safe?
Gabe defied his parents Rose and Wilhelm by going to find Sophie, and now he believes they had a right to worry: the girl's inner and outer beauty has enchanted him. Though romance is impossible—she is his brother's future wife, and Gabe himself is betrothed to someone else—he promises himself he will see the mission through, no matter what. When the pair flee to the Cottage of the Seven, they find help—but also find their feelings for each other have grown. Now both must not only protect each other from the dangers around them—they must also protect their hearts."
I'm going to start with the fact that this has to be one of the most gorgeous covers ever designed, simply because I can't get past that! As for the actual story, 4.5 stars for the best non-magical retelling of Snow White ever written. Melanie does an incredible job of taking notorious villains with special powers and making them over into regular people who are just as evil. Which... to be honest... is a little frightening! I especially loved her "Cottage of the 7" which gave a depth of character to the seven men that is simply astounding. The story became so much deeper and more wonderful under her hands and she does a great job of adding God to the stories while keeping the original fairy-tale feel. Sophie was a wonderful character, but I may be even more impressed with Gabe and his transformation. One of the strangest, flattest princes became a wonderfully round character who grows as a person and in his faith. Definitely worth your time to pick this up! 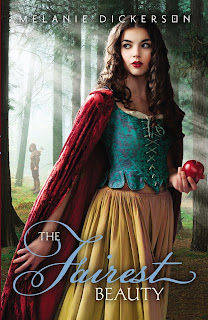