Sometimes the best synopsis is the one on the back of the book, not from your own head.

A Single Terrible Choice Faces the Vigil. Hide in Safety and Let Darkness Take Over the Land or Face the Growing Danger and Risk All of Their Lives.Their victory over the dark forces during the feast of Bas-solas should have guaranteed safety for the continent. Instead, Willet and the rest of the Vigil discover they've been outsmarted by those seeking to unleash the evil that inhabits the Darkwater. One of the Vigil has gone missing, and new attacks have struck at the six kingdoms' ability to defend themselves.

Worse, a deadly new threat has emerged--assassins hunting the Vigil, men and women who cannot be seen until it's too late. To thwart the perilous new risk, the church makes the drastic decision to safeguard the Vigil by taking the surviving members into protective custody. But there are secrets only the Vigil can unearth, and so Pellin makes the heart-wrenching choice to oppose the church in a race to turn back the evil that threatens an entire continent.

1: If you love fantasy then this is the book for you! I was captured by the pure genius of this tale.

2: Even though this is the second book in the series (well, there is a short e-novella I believe that is a prequel maybe to the first book) I wasn't really that lost. The author did a great job of making sure to throw in enough backstory to get it all.

3: I really enjoyed Lady Bronwyn's storyline. In fact, I picked her as one of my favorite characters almost from the start. When she finally became one of the viewpoints ( I'm not too sure of the technical term when you see and hear things from her perspective) I was super excited. Her relationship with Fess was probably my favorite thing to happen in the whole book.

4: Willet also had a great storyline, ( really all the vigil members did) and I enjoyed how his story grew. His relationships with everyone around him were fascinating, especially in light of the fact that he had a vault. I enjoyed his relationship with his guard probably most of all.

5: The only reason I didn't give this book all five stars was because of the part about Lelwin. It scared me a bit, and I know that that stuff really happens and that it served a purpose in the story, I really didn't want it to happen. I know it wasn't as graphic as it could have been but... 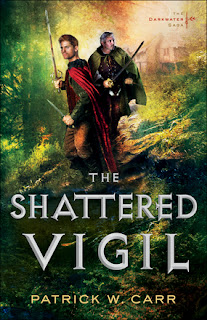 I received this book in exchange for my honest review.
Posted by Live. Love. Read. at 11:47 AM