Should he wed the perfect match—or the one he loves?
Edward Dalton, the new Duke of Langsdale, must soon take a wife to ensure the hereditary line. A young war widow seems the perfect choice. She is charming, well respected with impeccable character, and her connections to the Ton’s most important people is an asset he can’t ignore. But Edward is intrigued by another widow. The mysterious, hauntingly beautiful Lady Wayte.
Cassandra Wayte could not be a more unsuitable match. She isn’t received by polite society, and her notorious dealings with London’s underclass is the talk of nobility from White’s patrons to the most fashionable hostesses. It’s even whispered she murdered her elderly husband. But Edward sees a different side of the tragic lady, and he determines to discover the secrets tormenting her. As he peels away the layers of her resistance, he discovers a malevolent adversary stalking Lady Wayte and exposes a level of depravity that shocks even his war-hardened sensibilities. Can he win her trust and her heart? And at what cost to the dukedom?
As Cassandra’s relentless search for her husband’s murderer exposes both her and Edward to unseen dangers, all they can rely on is their love for each other and their faith in God.

1: First time for this author. I enjoyed it. Also.... possibly first time for regency. I thought I had read some before, and maybe I have, or maybe I just got confused and thought regency was something else. Either way, I was afraid at the start that I might not like it as much, but turns out, Elaine Manders did a great job making me fall in love with the gossipy ol' Ton.

2: I loved the characters. Even before I was really and truly "into" the story, little Sarah was a favorite character. Other characters became favorites quickly, like Cassandra and Edward (Obviously...) and Gama. Others took some time, but grew on me till I loved them too, like Lady Pugh. Of course, there were some who remained enemies to the end, and even a surprise enemy that added quite the twist to the story... (Maybe two surprise enemies... depending on how you view it) And are these enemies EVER fun to hate! Despise even!

3: This story demonstrates God working "all things to good", considering what poor Cassandra had to go through, but what she was rescued from, first because He sent Lord Wayte, and then Cassandra helping those poor girls, and then God sending Edward to rescue Cassandra (This girl is all the time needing rescuing.)

4: It was a little more....well, you know, dealing with the poor, trapped, girls so much.....but a little more...(can't think of the proper word here) than is usual for me. (It was still a great story. Believe me, it was)

5: I loved the vivid word pictures. The descriptions of the paintings, of the gowns, of Snowfire. Everything coming together until I could all but touch the Sarah's curls. 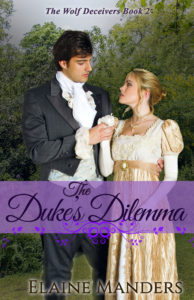 I received this book through the CelebrateLit blogging program. All opinions are (of course) mine.

Elaine Manders writes wholesome Christian romance and suspense about the bold, capable women of history and the strong, dependable men who love them. She prefers stories that twist and turn and surprise, told by characters of faith. She lives in Central Georgia with a happy bichon-poodle mix. Besides writing, she enjoys reading, crafts, and spending time with her friends, daughter, and grandchildren.

Historical romance became my favorite genre back in the seventies and eighties, and one of my favorite settings was Regency England. A Regency can be a romance in the Jane Austin mode or historical romance set during the Regency period. There is a difference, and The Duke’s Dilemma falls into this latter category. Yes, there is some of usual drawing room intrigue in an Austen novel, but The Duke’s Dilemma contains a serious spiritual theme. The plot fitted perfectly into my new series, The Wolf Deceivers.
I wrote the original manuscript nearly twenty years ago as a light, secular romance, but when I revised it to Christian romance, I was delighted to find the inspirational thread deepened the characters. Instead of merely fighting for her reputation while trying to wrest the duke from another woman, Cassandra, the heroine, must fight for her survival. Instead of being another handsome, sardonic nobleman, Edward, the hero, uses his intelligence and grace to protect Cassandra and win her love.
Even the secondary characters captivated me. Little Sarah’s match-making antics suited the Regency theme and provided some levity during the darker moments of the plot. Lady Ashford, Cassandra’s foil, developed a tenacity I had to admire in spite of all her shortcomings. And Sir Harcrumb became a villain I loved to hate.
Though the characters changed a great deal in the retelling, the plot remained basically the same. The only thing I added was a surprise twist at the end—something that has inadvertently become a part of my brand.
Every story is a learning experience for me, and I’m always grateful for how much I learn from my research and from the Holy Spirit. I’ve become more aware of those who deceive, and how vulnerable people, especially young people, are to Satan’s tactics. Also, I’ve unexpectedly come away with a better understanding of PTSD (post traumatic stress disorder). Although this is a new label, we all know it has affected people throughout history.
Yes, The Duke’s Dilemma has taught me much, and I hated to say good-bye to these characters. I love stories that move me during the writing and only ask two things of my books. That they bring enjoyment to my readers and glory to my Lord and Savior, Jesus. I hope this one does both.

To celebrate her tour, Elaine is giving away:
Grand prize: $50 Amazon Gift Card
1st place: paperback copies of Books 1 and 2 of the Wolf Deceivers series, The Chieftain’s Choice and The Duke’s Dilemma!!
Click below to enter. Be sure to comment on this post before you enter to claim 9 extra entries! https://promosimple.com/ps/bbab

Check out all these blog stops for this tour.

I can't wait to hear from you! Let me know in the comments your thoughts. Are you a regency fan? What is your favorite book in this genre?