Back of the book- "In 1794, as Kate Gruener's father prepares to move the family into the frontier of western Kentucky, Kate is eager to see untamed lands and live out her own story of adventure just as her father had during the War for Independence. And as she sets her sights on learning more about their scout, Thomas Bledsoe.
Thomas's job is to get settlers safely across the Wilderness Road to their destination while keeping an ear open for news of Shawnee unrest. But naive Kate's inquisitive nature could put them both in the middle of a rising ride of conflict.
Is there more to Thomas's story than he is willing to tell? Is there an untapped courage in Kate that can thwart a coming disaster?"

I'm giving this installment of The Daughters of the Mayflower 4.5 stars. I was thrilled to explore a time period that I don't often. The story was engaging and flowed along nicely for the most part. Truly, it put me in mind of a favorite girlhood book of mine, Indian Captive. With just a dash of wagon train feel added in, this book was hitting lots of interest points for me. I do enjoy books that have Indians in them. Especially when they are written without whitewashing Indians as horrid monsters with no feelings. I enjoyed the main characters a lot, and found myself in a rare mood of preferring the male lead over the female. The ending was also pretty great! I love a good ending, and Shannon McNear delivered that! Bottom line... If you're a fan of Indian Captive or you grew up watching Daniel Boone (yes, with good ol' Fess Parker) then you may want to reach for this book and add it to your reading list! Added bonus... it's only 250 pages, so it's a relatively quick read. (Compared to others... like some by Rosanna M White which are pushing 400 generally!) 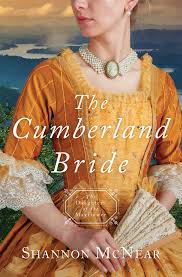 I received this book from Barbour Publishing for free. I was not required to leave a review, positive or otherwise.
Posted by Live. Love. Read. at 9:52 AM