I pulled this one out of my old hat... It's been waiting for a good long while now.

Young Jody adopts an orphaned fawn he calls Flag and makes it a part of his family and his best friend. But life in the Florida backwoods is harsh, and so, as his family fights off wolves, bears, and even alligators, and faces failure in their tenuous subsistence farming, Jody must finally part with his dear animal friend.

1: Is there any word for this book except "classic"? It's written in the style of other books of its era, yet it hasn't passed into oblivion. I'm gonna be honest, I read this book because I like the movie. Now, I'm so glad I read it. I felt like it had a slow start, and I dragged my feet through the first....bit... of the book. And then, it just up and took off and me with it. (The movie is pleasantly accurate, a rare thing.)

2: I was getting near the end of the book and it hit me, all of a sudden, that "The Yearling", the title, wasn't referring to Flag, not really. Jody was the yearling. Its his "growing up" story, a coming of age story that never dies.

3: Younger readers might want the abridged version, cause them Forresters can have a mouth on 'em.

4: I can honestly say that after finishing this my accent is twangy-er than ever. Everything is spelled phonetically, and with a deeply southern accent that you can't ignore.

5: This is a SPOILER for anyone who hasn't read or seen the movie... but I didn't cry when Flag had to be... well... you know. But that could have been because I spent 300+ pages preparing myself for it. That doesn't mean it wasn't touchingly sad. And the ending was just a tiny tiny bit different than the movie. Ma Baxter wasn't in the last scene, which made me a little sad. I love how the movie ended. 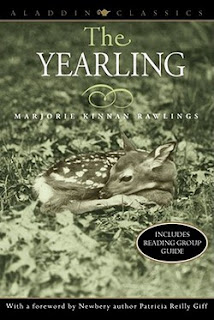 Email ThisBlogThis!Share to TwitterShare to FacebookShare to Pinterest
Labels: Classics, MG, YA