Today we have a lovely spotlight on Bastian from The Midnight Show by Sarah Pennington! 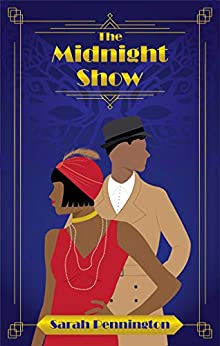 Bastian Dennell may not be the best-known or most experienced private investigator in Innsjøby, but that doesn’t stop him from doing his best to solve his clients’ cases. He has a knack for noticing the right thing at the right (and sometimes wrong) time and a genuine desire to help others by uncovering answers, solving problems, and, most importantly, finding and speaking the truth. Because of all this, while his track record might not be lengthy, he’s been fairly successful in his work.

As Bastian neared the Carousel Club, where he was to meet with his newest client, he paused to compose himself. Private investigators didn’t go about grinning and whistling like a common sap any more than they danced in the streets. Or, at least, they didn’t when they met with clients. Bastian studied himself in a reflective shop window. He combed his fingers through his dark curls, then adjusted his cap to a rakish angle and tugged on the lapels of his best jacket, straightening it. Someday, he’d save up for a few decent suits and a nice hat, but for now, this would do. He practiced a steely ice-stare, then a confident smirk, and settled on the former before strutting up to the door.

As a relatively young and unknown member of his profession, Bastian is very conscious of how he comes off to others. While he’s currently too broke to afford the nice suits and hats he feels a private investigator should wear, he puts serious effort into adopting what he thinks is the right attitude and expression. When working with clients, he often hides excited smiles behind a steely stare and exchanges cheerfulness for sharp-edged sarcasm. He doesn’t like it, and the act slips a little more often than he realizes, but he won’t get anywhere if people don’t take him seriously.

[Bastian] smiled wryly to himself. If helping out old birds always brought such luck, every man and woman over the age of fifty would probably have so many people bending to their whims that they wouldn’t even have to walk if they didn’t want to.

Most old birds, of course, weren’t Granny Starseeker or her kind. Bastian took off the glasses and folded them up pensively. What would he have seen, looking at her through them? He could guess — a woman, beautiful and ageless, wearing her wrinkles like a mask, with the threads of fate ready at her fingertips. His father had spoken of them by the name the Cormont academics used — Premiére Foire, First Fair — and claimed they were agents of the Divine who helped weave the destinies of kings and princesses and heroes. His mother had called them Fateweavers and said they tested the hearts of those chosen for great tasks, no matter their nobility. Bastian saw no reason why both couldn’t be true. At this particular moment, he was more concerned with the fact that one of them — or multiple of them — apparently deemed his case significant enough to interfere. Not that he was ungrateful for the help, but now he had a nasty feeling about whatever lay ahead.

The son of a Gallish immigrant and a Solorele native, Bastian grew up with stories of fey and fair folk from one side of the ocean and spirits, monsters, and shifters from the other. And while he’s not specifically a magical investigator, he’s used those stories to help him solve more than one case. But his knowledge is hardly exhaustive, and there’s a great deal in the world that his parents’ stories never even dreamed of . . .