Do you remember my second Waiting-on-Wednesday? Well....Dragon's Heritage is a prequel to the Dragon's Courage series (you'll find reviews for all 5 of the other books on this blog). It is the story of youngling Duskya as seen through her granddaughter's eyes. Mere wants to be a dragon rider, but so far, no dragon has chosen her. Duskya gives her granddaughter a journal from her first winter as a rider, hoping it will clear up some things for Mere. Turns out, dragon riding isn't the only desirable skill, and Mere might just have a never-before-seen talent!


This book, unshockingly, is definitely getting 5 stars!

1: I have yet to read a book by Kandi that I didn't love! She definitely has a way with words that makes me experience everything, almost like the way Duskya can see through Wryn's eyes and experience that way.

3: As always, I found the antagonists to have an amazing part in the story, causing frustration for 99% of the story and then spiraling up into an amazing, and sometimes shocking, redemptive arc!

5: If you read the others and you wanted a bit of backstory/prequel, Dragon's Heritage explains why every name has a Y and all the dragons have a W and a Y. It also totally expands the dragon senses, and how they work, and how awesome they are! 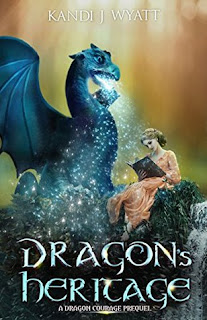 Thank you Pam! I feel so blessed to have been able to read the ARC of this story! I started as soon as I was done with classes for the day, and read it straight through, despite the fact that I'm in the middle of at least two other books!
Posted by Live. Love. Read. at 6:30 AM