This review isn't like my others, if you'll permit me the liberty. I found that I had rather just ramble through this one, rather than organize myself rationally. This book gets 4 stars. And the plot synopsis is a copy and paste from goodreads.

From the day they met, John and Elizabeth were destined to fall in love. Their whirlwind romance started when they were young college students and lasted nearly thirty years—until Elizabeth died of cancer.

So when John Baxter is asked to relive his long-ago love story with Elizabeth for his grandson Cole’s heritage project, he’s not sure he can do it. The sadness might simply be too great. But he agrees and allows his heart and soul to go places they haven’t gone in decades. Back to the breathless first moments, but also to the secret heartbreak that brought John and Elizabeth together.

At the same time, Baxter family friend Cody Coleman is working through the breakup of his complicated relationship with Andi Ellison. He is determined to move on when a chance sighting changes his plans—and heart. Can Cody convince Andi to give their love another try, or is it time for them to say goodbye, for good?

As school comes to an end, Cole presents his report on the love story between his grandparents John and Elizabeth Baxter. It is a tale that touches the hearts of the entire family, and one that causes Cole to better understand his own beginning.

Whether you’re meeting the Baxter family for the first time or finding them all over again, Love Story will stir your heart and remind you of the generational impact of love and the eternal bond of family.

Okay, bout time for a picture. 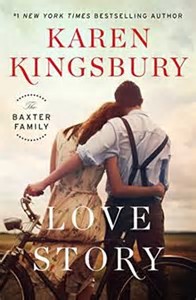 This book is the foundation of all the Baxter family story, though it is written after more than 20 previous books. I found myself, like Cole, having the story "clearly weaving its way into my soul". I enjoyed so much the story of Andi and Cody. I loved seeing how they were able, with lots of prayer, to find their way to each other, especially when just the chance sighting of Andi on TV was what got the ball rolling, so to speak. I enjoyed finding out about how the Baxter family all got started, even though I haven't actually read all of them, or even half of them. I did find that I was quite uncomfortable with week 2 of John's interview, and yet I never once thought "Well, that should never have been written". Quite the opposite in fact, I found myself saying "why did they do that, that wasn't wise" and laying all the blame squarely on the shoulders of people that for a few hours I had forgotten were only characters in a book. And Bailey was amazing!

I received this book from NetGalley in exchange for my honest review.