Review: A Killer Among Us by Lynette Eason

This book follows the book I reviewed yesterday, and I'd be careful reading this one because it might probably have a spoiler (general, not the who-dunnit) Anyway, you've been warned so on with the show. Kit and Noah have just been partnered up, but already they make a great team, in more ways than one. A serial killer called the Judge is getting his revenge on people who've slighted him, but he seems to have an obsession, a romantic obsession, with Kit. Working with Noah and her two brothers-in-law Connor and Dakota, Kit must get this guy before someone else dies.


Ok, so I'm giving this the same sentiment as the other two in this series, a 5, but at heart a 6.

1: Noah gave everyone his pastor's number! Such an example. Wow. And watching him help Kit was amazing! (so many exclamation points.... yeah that's probably not gonna stop anytime soon, sorry) Definitely loved the spiritual side of this story!

2: So remember yesterday how excited I was that Sam and Connor's story kinda kept being built on in book two... well guess what! Book three is kinda cumulative too! I'm so happy that I'm having a hard time writing this review... I only wish that they would have at least mentioned Jenna in passing...

3: I had book 2 bad guy pegged from the beginning. This one was so much harder, but I did get it. Eventually. I love how every one of Lynette Eason's books have just the right clues to find the bad guy. It's quite the game. Also, the Judge's dad, he might give me nightmares. Not expecting that one, and you can't unsee it.

4: Every room was described so perfectly, without being bogged down with words. This book created a world I could step into. I was there. (I reiterate, why is this series not made into movies? Hmm?)

5: So, I know this comes up a lot, a lot a lot actually, but stories that have to deal with adoption appeal to me, so much. And I loved watching Kit's journey back to God and to peace with her past and her future. I need to cry. Help! I love this series so so much.

This is a must read. I'm not joking around. Go buy this series. You need it in your life. 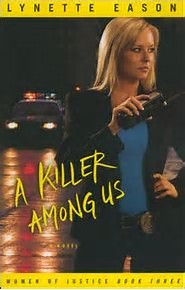