Morrow Little is coming home, to the Red River. She's been gone for two years, and she is ready to see her Pa. If only her ma and baby sister were still alive, and if only Jess hadn't been taken captive by the Shawnee. Morrow's fear of the Shawnee is understandable, surely, but Pa doesn't seem to think so as he befriends a Shawnee chief and his handsome son. Facing the dangers of the frontier, Morrow must look to the Lord as her guide in the trying circumstances.


1: Looking at my shelves, I saw no books set in the Revolutionary War, and I was pleased at the history in this book. Also, this was a book from the frontier, which is altogether different from the east coast. It's an action packed book, covering about 3-4 years, and that makes for a really complete story. Everything that I wanted to happen had time to come out, since the book covered such a long period of time.

2: I was a little shocked to see that Morrow was the only POV in the whole book, cause it's been so long since I've read a book like that. However, I think that it almost made me feel more like Morrow (I'm butchering this wording!) and feel her emotions and everything deeper than if it had been switching. It's like becoming Morrow for 362 pages!

3: The chapters were a little long, but the story was captivating enough that I hardly noticed that. The writing and characters were so wonderful, and, without spoiling anything, the ending made my eyes a little wet. I loved how all the characters interacted with each other, each relationship unique in its sweetness, or lack thereof in some cases.

4: The 1700s dialect! Tis and Twas being used all the time, it was awesome! Goodness! If you're one for written in accents and speech quirks, then this is the book for you. Also good if you want to learn a few Indian words.

5: Seeing the change it took for Morrow to get over her hatred and to learn to forgive, and just to see how free she was from bitterness after she forgave, shoot! It was so beautiful! 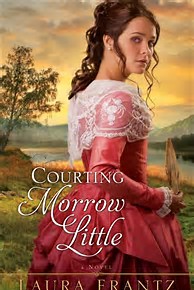