It's been a while since I've done one of these. Sorry bout that...

Here's the plot summary to this sequel to Treasured Grace (Remember that one?) It comes out in July I believe.

Shackled by Her Past, One Woman Searches for Healing, Forgiveness, and Love
Hope Flanagan survived the massacre at the Whitman Mission, but at terrible personal cost. Safe now in Oregon City, the gentle rhythm of tending her family's flock of sheep is slowly healing her mind and soul, but her precarious new peace is shattered when Hope is asked to testify against the Cayuse responsible for the massacre. She's not sure she can bear to relive the events of those horrific days, but neither can she risk her attackers being released if she doesn't tell her story.

As Hope struggles to make her choice, an Army lieutenant named Lance Kenner becomes an unexpected ray of light in her life. Perhaps she is still capable of love after all. But will Lance still want her if he learns the whole truth of what happened to her at the mission? Or are the secrets that lie in his own past more troubling? 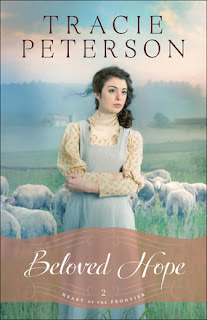